Now before I even get into this, let’s look at how it all began. Oktoberfest traditionally began with a massive wedding celebration in 1810 – fast forward to now, it has become one of the biggest festivals in the world – the Germans know how to keep the party going!

Filled with thousands of local and international visitors, everyone dons the traditional lederhosen or dirndl and clash their mugs together in a celebration of beer and good times! With good food, friends, beers and costumes, it’s something that’s always been on my bucketlist. But in saying that, it can get a little insane. Hangovers, and partying till the sun comes up – here’s my tips on how to survive… 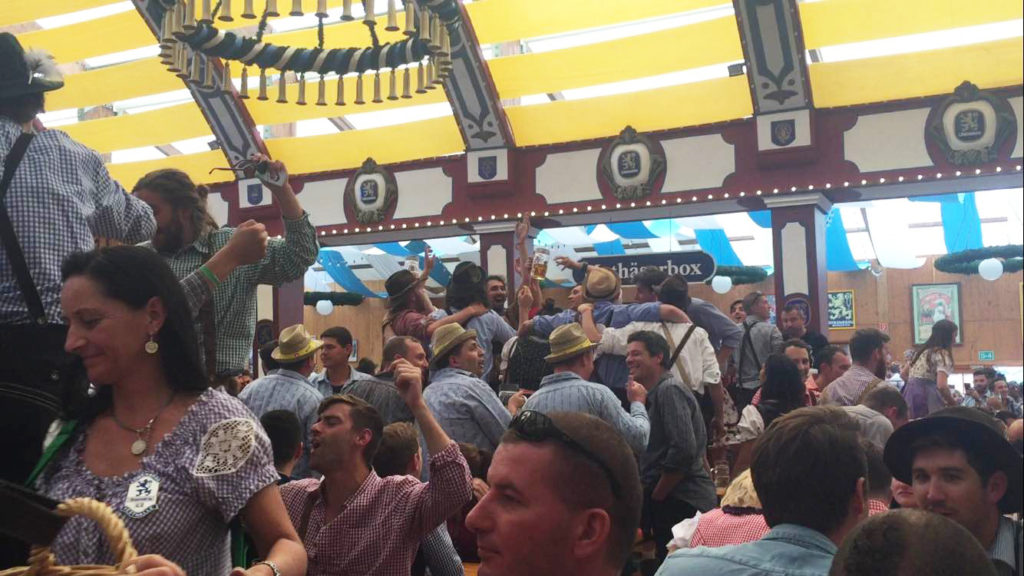 Oktoberfest traditionally starts in the third weekend in September and ends the first sunday of October. It began with the Royal Wedding on 12 October 1810. Crown Prince Ludwig, later to become King Ludwig I, was married to Princess Therese of Saxony-Hildburghausen on 12 October 1810.

Today, Munich Oktoberfests are held in September because the weather is milder than that experienced in October. In Munich, the fest lasts for 16 days, beginning on a Saturday in September and always ending on the first Sunday in October.

Munich, on the famous “Theresienwiese”, which is also called “Festwiese” by the locals. 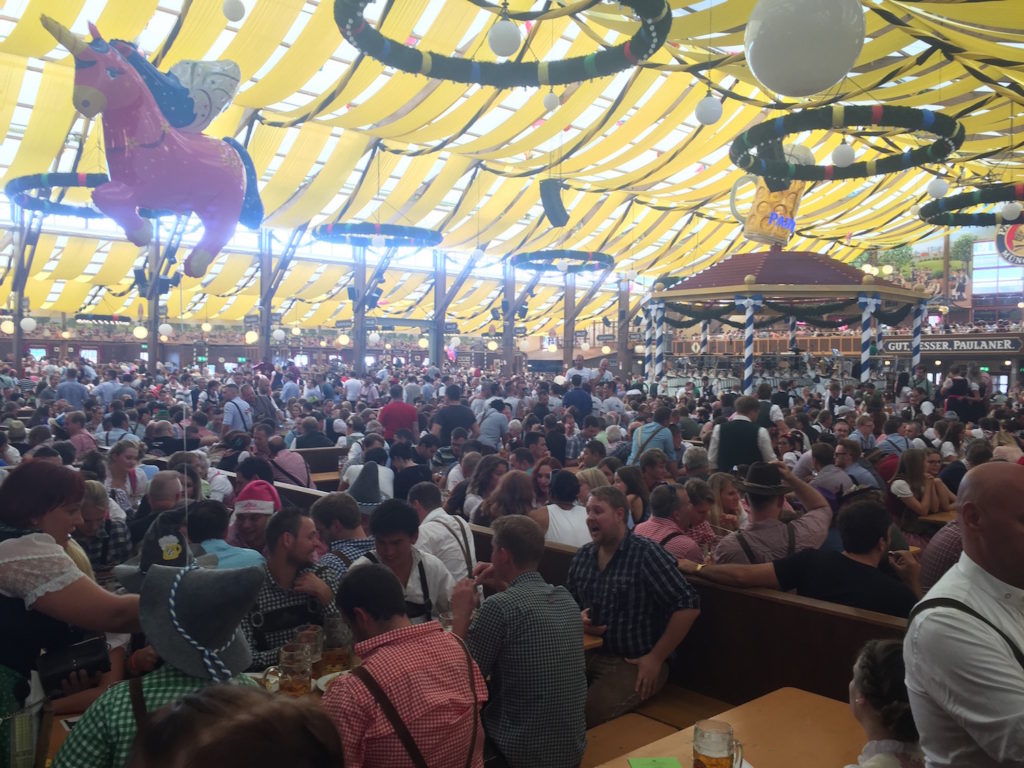 > There is no entry fee

Most places don’t take card or require a minimum payment. ATMs are available within the grounds though there are usually queues.

“There is a special beer brewed exclusively for Oktoberfest every year, fittingly called Oktoberfestbier. There are strict guidelines the breweries have to follow: the beer has to conform to the Reinheitsgebot (German Beer Purity Law – yes, there is such a thing!) and it must have been brewed within the city of Munich. At 6%, it has a higher alcohol content than normal beer.”

Don’t fret, there’s plenty of options available! All tents offer ‘Radlers’ – beer mixed with sparkling water, and you can even get your hands on some Schnapps shots – just make sure you keep in pace with the beer drinkers. There is also water and fruit juices available but they cost almost the same as the beer. You can also find wine tents though they are usually smaller.

> The tents are named after the brand of beer sold inside

I pictured Oktoberfest with lots of tents on muddy grass, in reality it was a concrete carnival ground, with buildings for tents.

As you can probably imagine, it gets confusing trying to exchange orders with the waitress in the tent surrounded by hundreds of other people.

> Most meals are usually around €15

> What food options are there?

> Usually you have to ask for the English menu

Usually on every table there is a food and drinks menu, though for an English version, the waitresses/waiters keep them on their person. 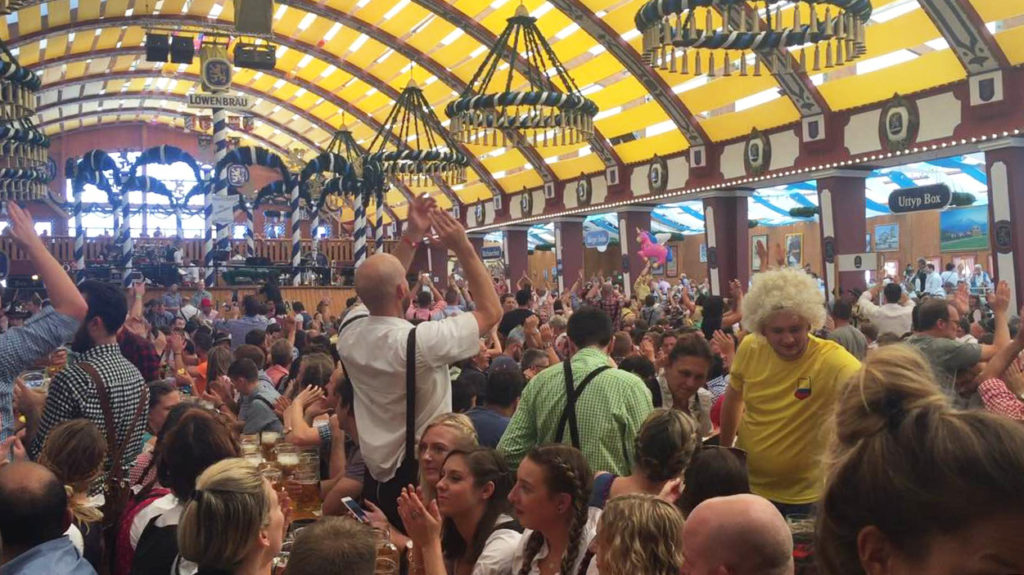 Very popular at Oktoberfest, fairs and Christmas season, these are traditionally decorated with icing sugar and are inscribed with messages – intended for someone you care about. The messages range from affectionate to even some obscene ones – but they are usually bought as souvenirs – and don’t worry, they’re edible!

Don’t be shocked when people publicly start snorting a white powder Wiesn koks — which translates to Oktoberfest cocaine — is a popular Oktoberfest pick-me-up. While it looks like cocaine, is snorted like cocaine, and is called cocaine, it’s really just a harmless mix of a sugar, cinnamon and menthol that’s sold at Oktoberfest and totally legal.

– will read “Reservierung” or “Reserviert” at the end of the table along with their reservation time, name and number of people. Reservations are usually void if the party doesn’t show up within half an hour of their allocated time.

> Reservations are not required – they are just easier

> If you don’t have a reservation, show up early

– there are strict occupancy rules. You pretty much just have to sit wherever you find a space – so it’s better to travel in smaller groups.

Not only do they have to deal with drunken customers, they also have to be able to carry up to 10 beers at the same time!

> Outside of the tents, its pretty much a carnival 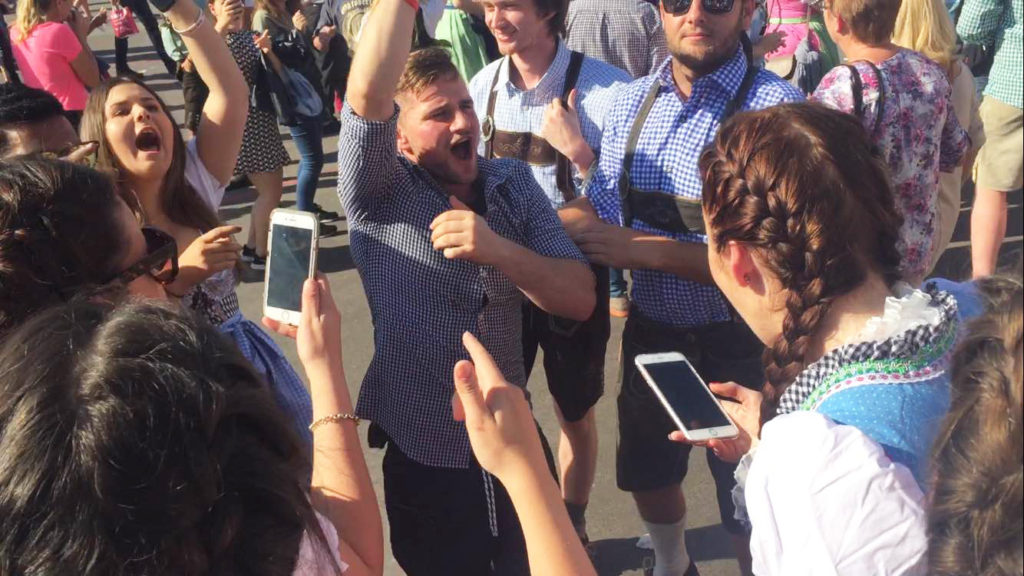 I can’t even count the amount of people I saw walking aimlessly around Oktoberfest not knowing which way was up. Luckily for someone on our tour, I found one of our tour mates stumbling around, and without me he definitely wouldn’t have made the bus home.

> Figure out your way home before you start drinking

> If you stand up on the table, you have to skull your drink

Otherwise be prepared for some booing, having food thrown at you and possibly being kicked out of the tent. 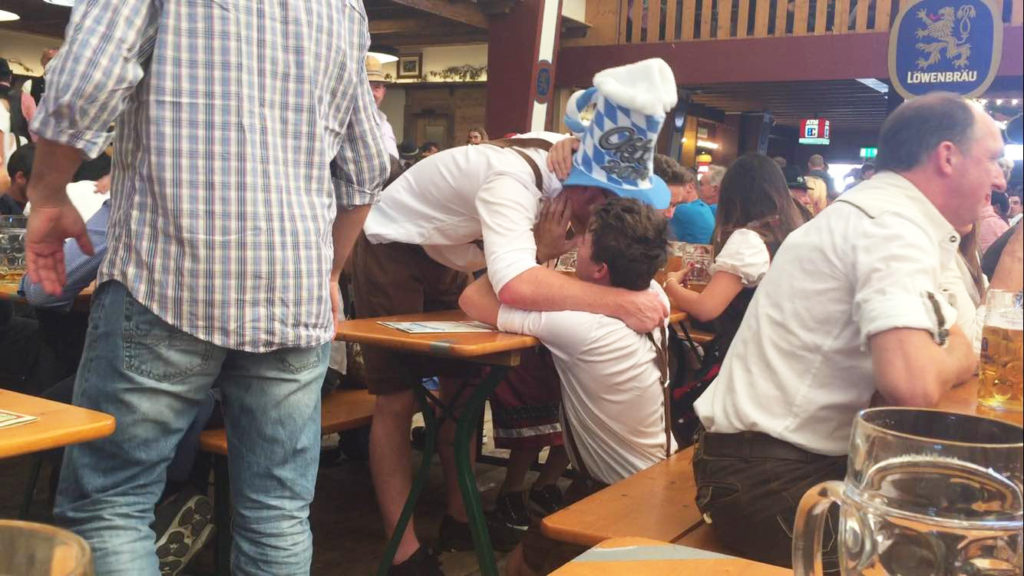 Parking is pretty much impossible at Oktoberfest and if you choose to get a taxi you should be prepared for traffic jams. The best option is to take public transport.

This is the second weekend of Oktoberfest when all of the Italian tourists come in the thousands. So many come that the advertisements and radio stations are made available in Italian.

> Where can I get a Lederhosen or Dirndl?

Once in Munich, almost every second store you pass will be selling Oktoberfest wear. For women, the way you wear your drindl can show whether you are single or not – tied to the left = available, right = taken, centre = not looking. For men, wearing a neckerchief says you are unavailable.

The traditional dress for men is the Lederhosen. These are an essential part of the men’s traditional dress, usually worn together with a checkered shirt, knee-length socks, and special shoes. For women the dirndl consists of a bodice, blouse, skirt, and apron. The name simply derives from the word Dirne, meaning ‘girl’.

– it won’t be a problem if you can’t speak German, it’s just nicer if you go out of your way to memorise a few.

What are your tips to surviving Oktoberfest? 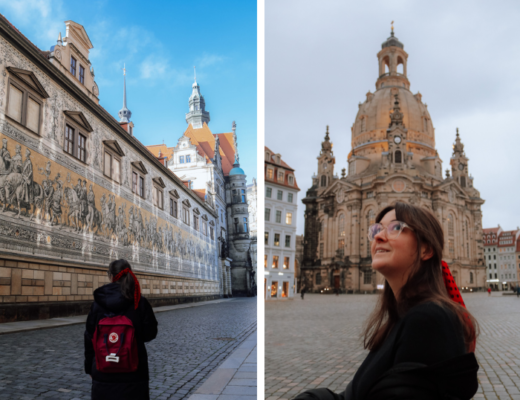 Weekend Guide for your first time in Dresden, Germany 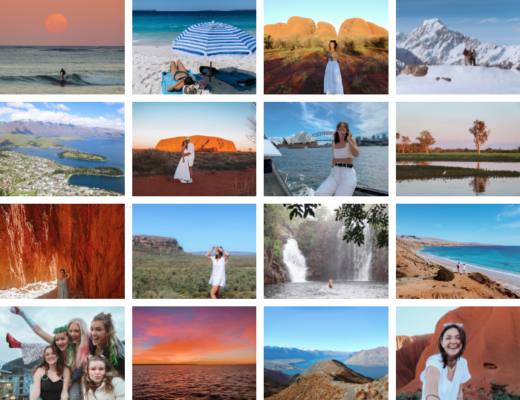 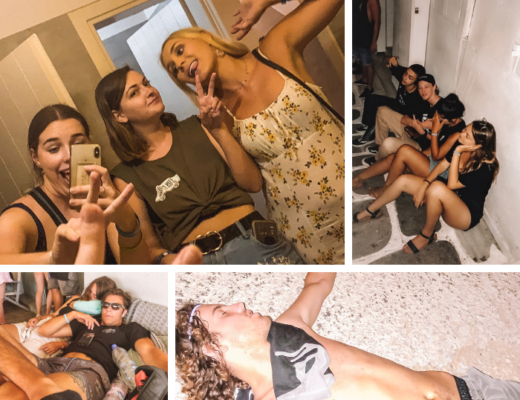