10 THINGS TO TAKE HOME WITH YOU FROM THE GREEK ISLANDS

1. A Mati talisman for the Evil Eye

While exploring the islands of Greece you will without a doubt spot the peculiar blue eye talismans that line the many markets, stalls and shops. They come in all different shapes and sizes, mostly as jewellery, but it is also seen on bags and clothing as well as other memorabilia. The Mati is said to protect whoever wears it from the Evil Eye. The Evil Eye is extremely popular folklore within Greece. It is said that the Evil Eye is the belief that a person can be affected by someone through the casting of a pernicious glare because of envy, or just their negative energy towards them. The colour blue is seen as a protective colour, so when it surrounds the eye, it provides protection against those feelings of anger or jealousy that could bring misfortune to the person receiving the curse. 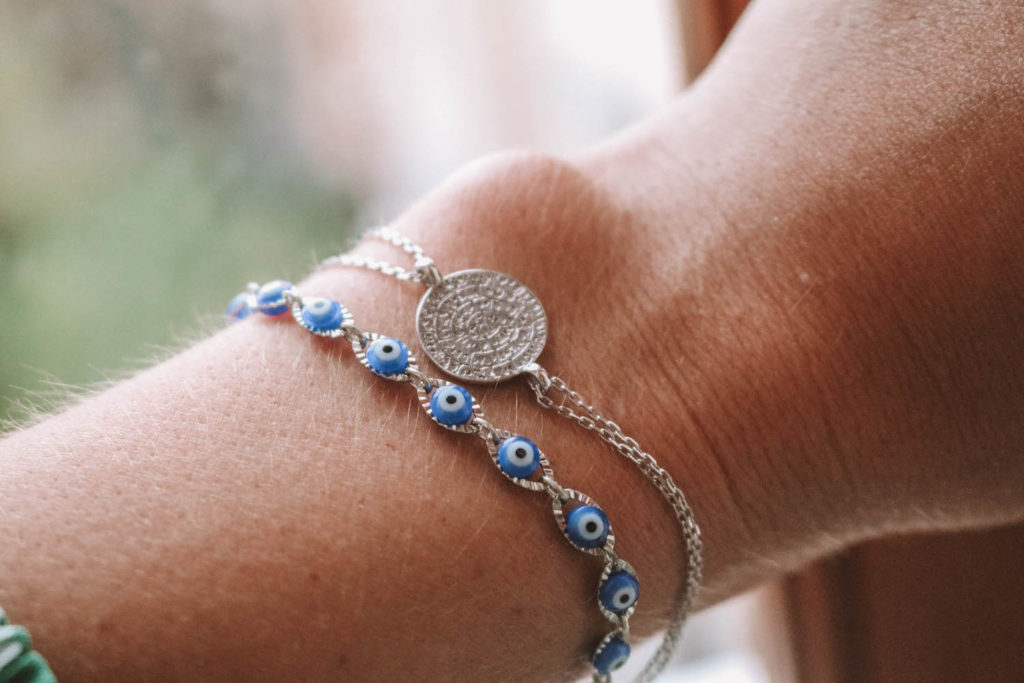 2. A sore head and a new singlet – take to the Slammer Bar!

Now I’m not entirely serious with this one, from experience I can assure you that it doesn’t actually hurt (enough to feel the next day?). The Slammer Bar is an Ios must-do when visiting the party island of the Cyclades. The Slammer shot consists of wearing a helmet, to which you are hit with your drink, which you then finish, and once you have seen that off you are hit with one of the random objects that the bartender chooses – a skateboard, a fire extinguisher, a hammer, or even the odd crate.

Now when it comes to singlets, I don’t mean something you’ve just picked up at the markets. On the island of Ios almost all of the bars and clubs offer shot challenges that gift you with a singlet. There are 6 shot, 7 shot or 10 shot challenges, and the more shots or the more expensive, the better the singlet or jersey. As the shots are mixed rather than straight liquor they are “safe” to do without the worry of suddenly blacking out. Some people even go bar hopping down the streets for a new holiday wardrobe.

Whether it’s from hiking, climbing, or just generally having a good time, a bruise or two is something that’s hard to escape on the everyday adventure in Greece. From battling for the best photo spot at Oia through the wades of tourist, to climbing up active Volcanos in Santorini. a little blue and purple is the least you could take away from these experiences.

While in Santorini, my group of travelling misfits was running late for our boat over to the Volcano, so we had to run down the particularly slippery Donkey Trail that led down to the wharf with 10minutes left in 30+ degree heat. Dodging donkeys, and droppings in Havianas and feeling the scorching sun on our shoulders we made the boat, to then have to hike up to three craters of the volcano – and though it was painful and draining it’s one of the best memories we took away from that trip – and we all left unscathed. With all of that, my most significant bruise came when I got a little too excited about McDonalds and slipped on the marble gutter… 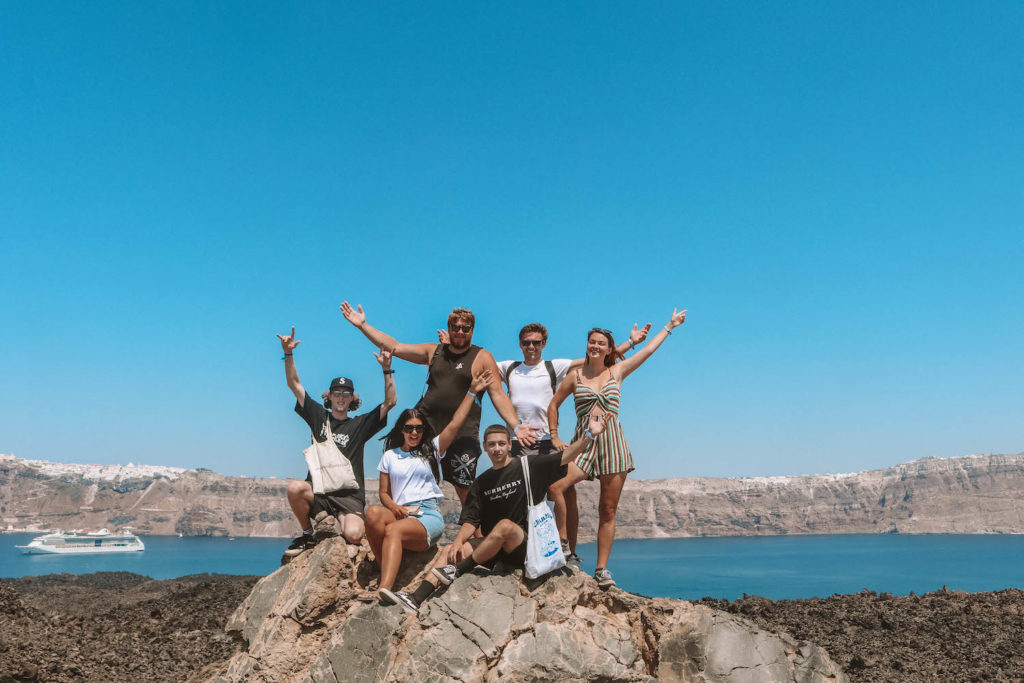 4. A taste of Gyros and Ouzo 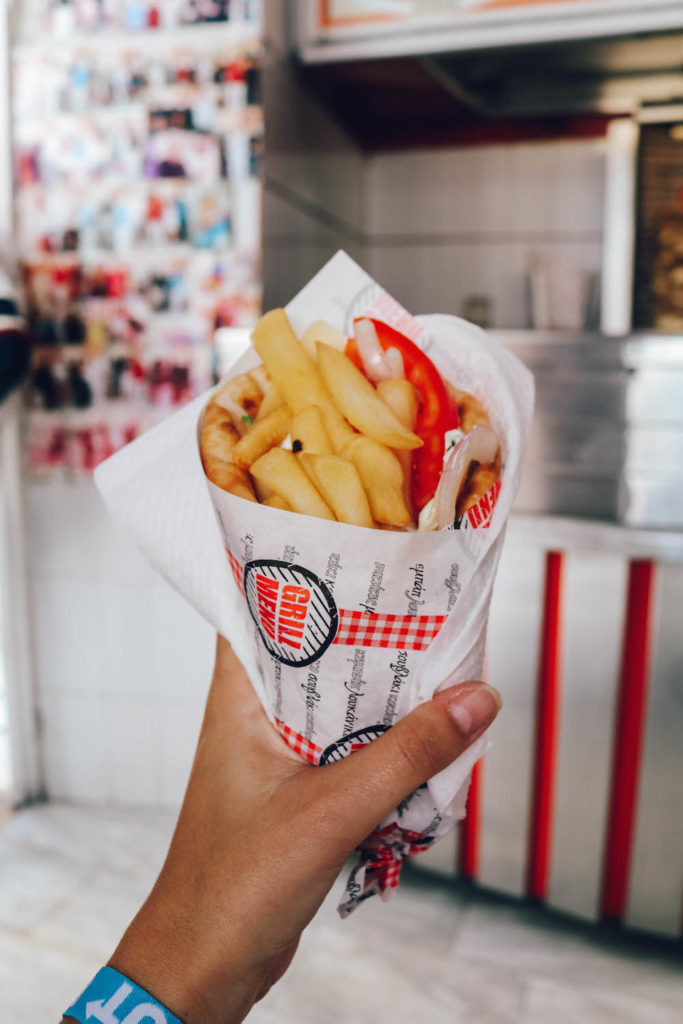 A gyro is a Greek dish made of meat, traditionally pork, chicken or lamb, cooked on a rotisserie and served wrapped in flatbread with tomato, onion, tzatziki sauce and chips. Travellers can find these almost anywhere in Greece, and they are a cheap alternative for eating out.

Though not my favourite drink of choice, Ouzo is worth trying while in Greece. An Anise-flavoured aperitif, it is considered the countries national drink and is even believed to cure many illnesses and is used as a medicine for the flu, menstruation and toothaches. It is best served with seafood and fresh cheeses.

5. A picture of the famous Oia sunset

Recognised around the world, Oia in Santorini is known for its famous sunset views – and draws hundreds of tourists on a regular basis. Some show up early to score the best spot, but it isn’t too difficult to get yourself to a nice open view as long as you don’t mind getting up close to a few other people. No matter where you view it from, the pastel colours of the sunset over the cliffside’s white houses and blue domes is a sight that can’t be missed. 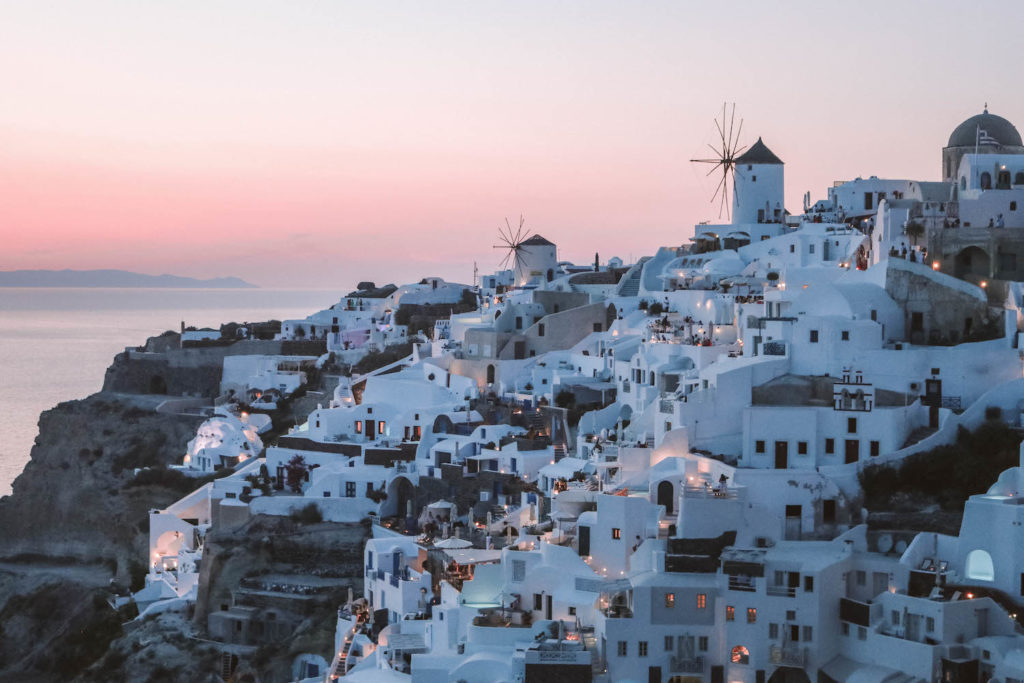 Scientists have been trying to decipher the mysterious “Phaistos Disk” since the 4,000 year old disk was discovered in 1908 in Crete. One of the few surviving artefacts after the Minoan Volcano eruption during the mid 2nd millennium B.C. its purpose and meaning, has remained disputed, making it one of the most famous mysteries of archeology.

Earlier this year the code was finally deciphered, and it was concluded that the disk may contain a prayer to a Minoan goddess.

When travelling with Busabout, the introductory walk around Santorini has the option to stop at a Jewellery shop that provides a 50% discount to those on tour. The prices range from incredibly affordable to the more costly so it has something for everyone. 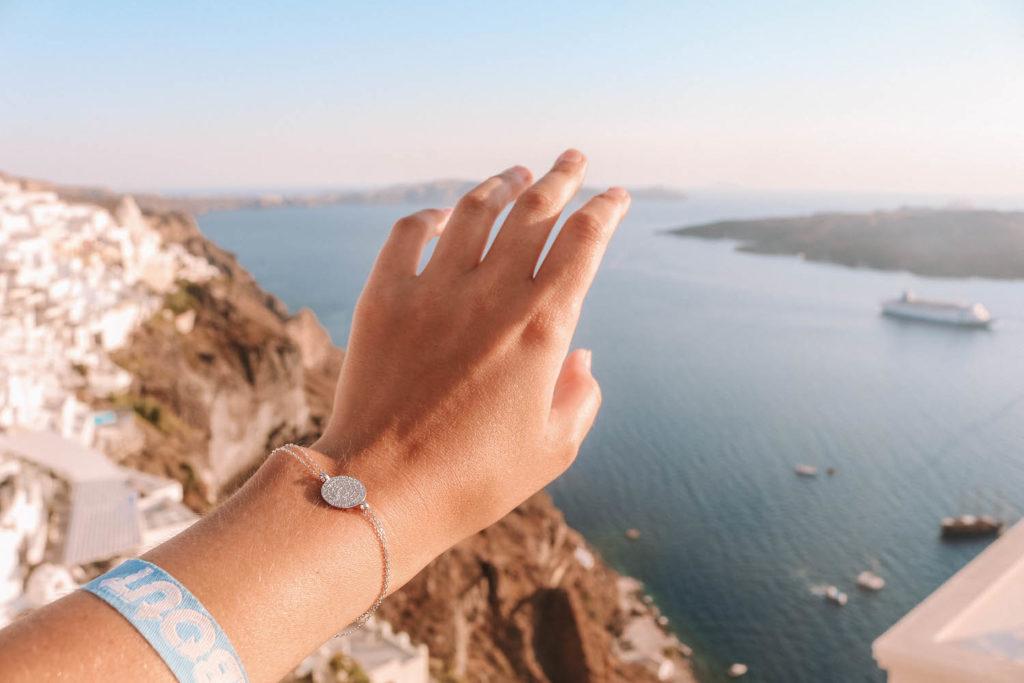 7. Something that’s turned a little yellow

If you’ve heard of Santorini’s Volcano, then you’ll surely have heard of its natural hot springs.

The Minoan eruption of Thera was a major volcanic eruption (with a volcanic explosively index of 6 or 7) that dated back to the mid-second millennium BC and it was one of the largest volcanic events on Earth in recorded history. There is no clear ancient records of the eruption, and it is believed that this is what inspired many Greek myths.

Unlike most hot springs where you step into pools of warm water, this experience has you jump off of the side of the boat, and swim in towards the rocks where the water begins to change to a orange-rust like colour. The further in you swim, the warmer the water – which can get up to 26degrees celsius.

Locals say that the mud that lines the bottom is good for your skin, so most people get scrubbing before they swim back to the boat. Unfortunately, the water of the hot springs can stain your skin and your clothing, so it is best to wear dark colours or things that you don’t mind ruining. It can be washed out, but it’s worth considering how accessible laundry facilities are while you’re travelling.

The cultivation of the olive tree in Greece goes back to 3500BC and ever since has played an important role in Greek mythology, cuisine and everyday life. In Athens it has a symbolic meaning due to its connection with the Goddess Athena – folklore tells that both Athena and Poseidon wanted the city to be named after them, so to settle this they were told to give the city a gift, and whoever provided the best gift would get to name the capital. Poseidon gifted flowing water, though as this was salt water it wasn’t of much use to the people and the city itself. Athena planted a tree, an olive tree, and now it is seen to symbolise peace and prosperity. Greek extra virgin olive oil is of exceptional and fresh taste and is used throughout most of the cuisine if not even on its own.

9. A little bit of the language

I had to go there, it’s cheesy but true. Though solo travel is easily doable, many of these experiences are made through the people you travel with and the memories that you make with each other. As I travelled with Busabout, I was able to get to know the people on my Greek Island Hopping tour and we shared the experiences together. We spent our days walking our feet flat from exploring and jumping into cool blue waters, and our nights playing games at our accommodation and going out into town with safety in numbers. 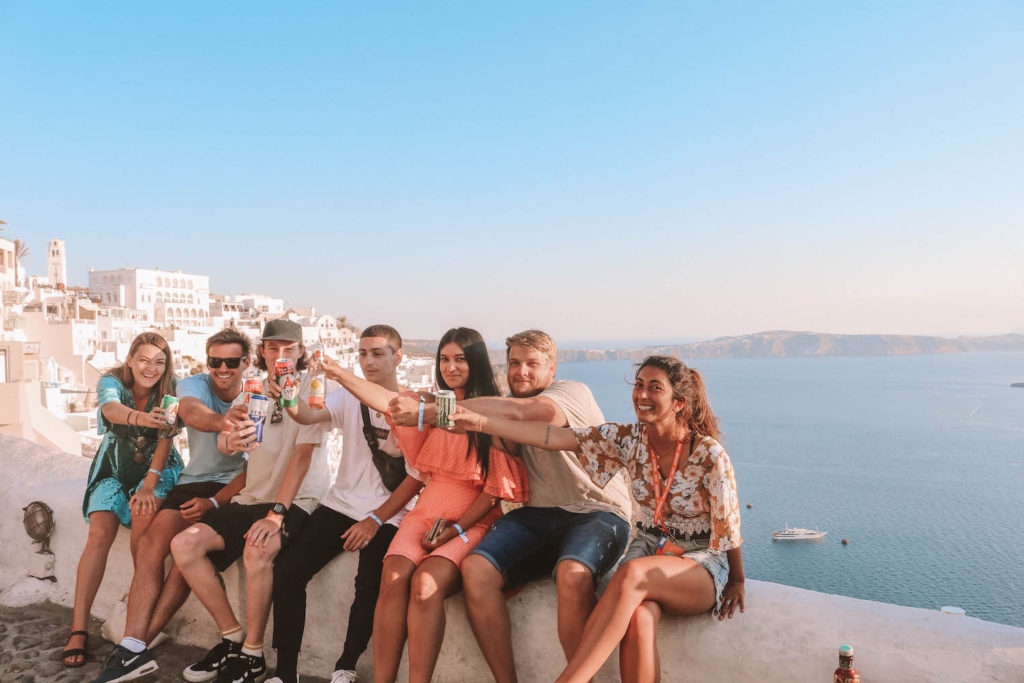 What would you bring home from the Greek Islands?

THATraveller was welcomed to Greece thanks to Busabout’s Flexi Hopper Tour. 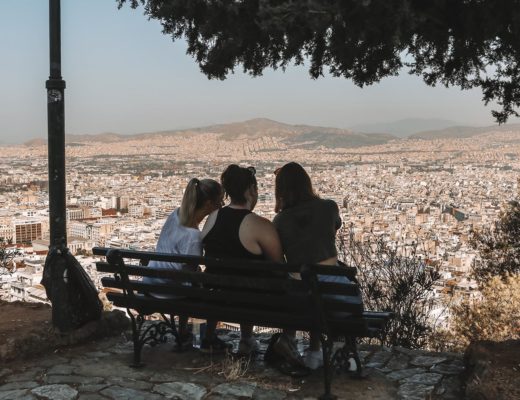 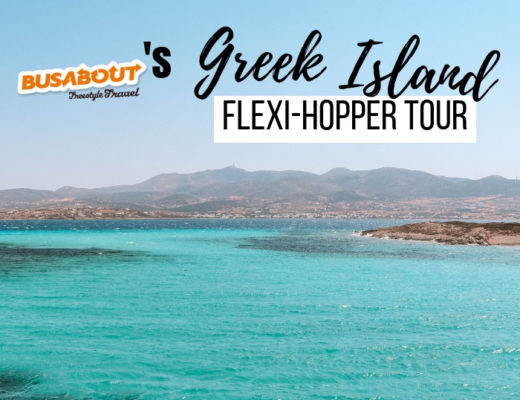 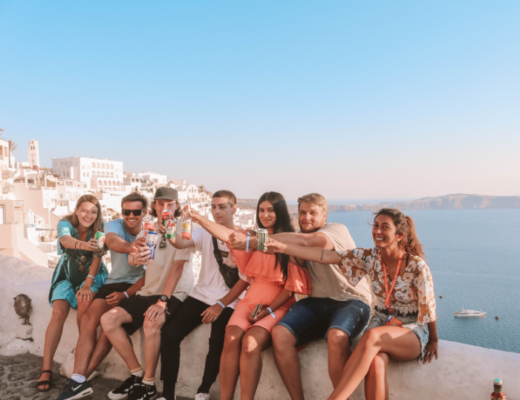